Our Annual Alumni Trip to Berlin Is Becoming a Classic

The newly formed red-green-red Bremen senate was present at the German Federal Council for the first time on September 20 – and we alumni were in Berlin for that! It was the highlight of our excursion, which brought us to political Berlin early that morning – as tradition wants in perfect weather.

After a walk through the Tiergarten park, we were awaited at the Bremen state representation for breakfast. Tanja Prinz – Federal Council coordinator and advisor for agricultural policy and consumer protection – welcomed us warmly and explained the tasks and the exciting history of the state representation.

Passing the Kulturforum and Potsdamer Platz, we headed for our next goal: the German Federal Council. There, we were given an instructive yet humorous introduction to the rules of the Federal Council – and then we were able to attend.

At an exciting tour of the German Resistance Memorial Center, we learned a lot about the broad political spectrum of the resistance – and how alarmingly little response these courageous acts of resistance received in the German population of that time.

The wonderful program, good company, and fantastic weather provided for a great atmosphere and lively conversations that left us with joyful anticipation for the next trip. 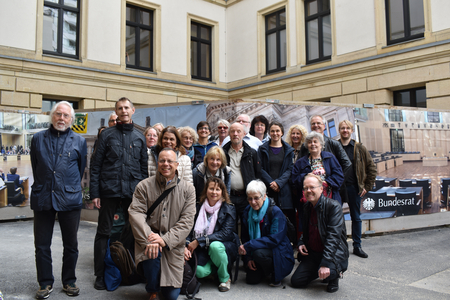