On an Espresso with... Christoph Ranze, Managing Director at encoway, Bremen

In the newsletter we interview our members about their time at Bremen University. In this issue we interviewed Christoph Ranze, Managing Director of encoway. Would you also like to appear in this section? Then please contact Ute Mai at the office: alumniprotect me ?!uni-bremenprotect me ?!.de.

It was a very detailed espresso – the top mid-tier employer (according to Focus magazine) had a lot to say. Christoph Ranze neither was born nor grew up in Bremen. He, a farmer’s son from Lower Saxony, came to Bremen being specialized in AI after studying at the University of Applied Sciences in Trier. Finally back north, he moved to Bremen in 1993 (when Werder Bremen became German Champion in Stuttgart!). After finishing his diploma thesis and a first employment at IBM, he arrived on campus as Professor Herzog’s research associate in the Department of Mathematics and Computer Science. After a stop as an executive director at the Technology Center Computer Science (TZI), he founded encoway.

His most important memory of the University of Bremen?

His main memories revolve around the advantages of the experiences in working in an interdisciplinary fashion. His research projects were never just about computer science but always also about its application. In collaboration with biologists, microsystem engineers, the BIBA, or other institutes or questions, the focus was always on finding the best possible solutions. And this was what drove him: Why, what for, and how something is done. Fundamental questions were asked and answered interdisciplinarily. Even in his time in computer science, the intensive four-semester-long project phase still existed – a level of quality and intensity that has been lost to a certain degree in the Bologna reform, according to Christoph Ranze.

Who has influenced his career the most?

Definitely Professor Otthein Herzog, who introduced him to the industrial company Lenze during a research project. From this practical project, the chance for a start-up developed, leading to the founding of the encoway GmbH. This successful transfer from being a research associate to being an industrial entrepreneur has formed him and is a classic success story. The start was made possible without public funding – simply out of the collaboration with Lenze. Christoph Ranze has now been a passionate entrepreneur for over eighteen years. This is why the – almost finished – doctoral thesis he had started is still lying in a drawer. When he started his own business in May 2000, his thesis fell by the wayside. He has never regretted it, though, since everything fell into place and growth of the spin-off accelerated very quickly.

What advice would he like to give to the students of the University of Bremen?

For one, to look around typical professions. Form your own impressions early! is his advice. It is about recognizing paths and determining how to go them – in research, as an employee in economy or administration, or by daring to take the leap into self-employment. Develop your own position! is his top advice as well as Get out of the building! To try out different jobs in different businesses. This is not just general advice by the entrepreneur – no, Christoph Ranze is proud of his house-made talent pipeline. He attaches tremendous importance to supporting young talents: From a group of currently over forty students and eighteen apprentices, he will be able to meet half of his personnel requirements. They are tomorrow’s colleagues. That is how the current 200 employees are made 250 in the coming year. The only thing sought-for is motivation. It’s the drive that counts. That is exactly what some new recruits were able to prove during the most recent internal hackathon weekend. Their knowhow and speed will provide solutions for current problems as well as those of the future.

What ties him to the University of Bremen?

The hope of a functioning future! is his immediate answer. The university is an important anchor for Christoph Ranze – which is equally true for the surrounding industry. Christoph Ranze is proud to be a regional initiator. It implies responsibility in both directions. This connection between the university and the industry is an invitation for togetherness, to give one’s common ground some space. Free space. One of his favorite quotes in this regard states that ‘making is wanting – just more extreme!’ (“Machen ist wie wollen – nur krasser!” Hans-Uwe L. Köhler, 2017). 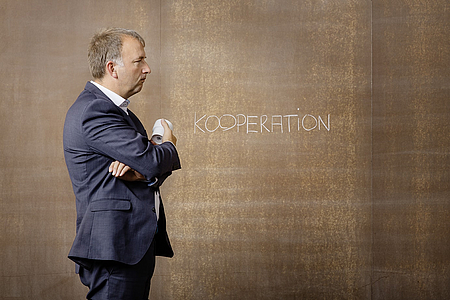 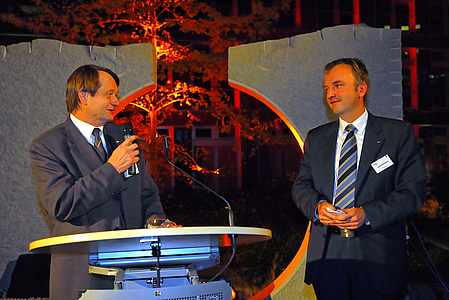 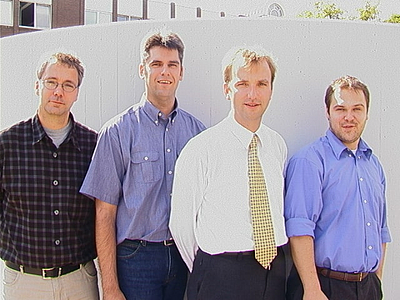 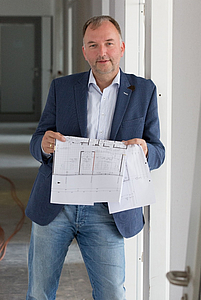 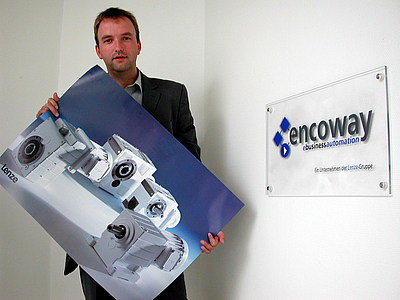 What does the work of Alumni der Universität Bremen e. V. mean to him?

An enormous potential of alumni that should be used even more. Encoway stands for low hierarchies, for the early promotion of talent, and another form of division of labor. An open and friendly atmosphere is natural – lived community and collaborative discussions as well. That means that the boss will sometimes make coffee, and the apprentice’s ideas are heard: These internal structures are important here. In order to see the person behind the business a little better, Christoph Ranze also answers completely different questions. When asked for his goals and visions for the company, he gets excited about growth and chances. 20 % growth had always been possible in the last years – the boom of the industry ensured many new assignments. There is currently lots going on on the European market for engineering!, says Ranze. Digitalization allows for incredible growth spurts. Bremen as a location has a tremendous competitive advantage. The main factor for encoway’s success: motivated and competent employers.

When asked for his personal role models, he turns thoughtful. It is rather characteristics that are exemplary and that impress him. Ranze, who as a passionate sailor used to regularly sail on the Alexander von Humboldt already when he was young, is most impressed by courageous people. That is true, for example, for captains bringing their ships around Cape Horn. He thinks of role models such as Paul Homan, who typifies courage and, at the same time, has an odd soft spot for young people.

But also the employees at encoway inspire a lot of respect in him when they – contrary to himself – are “fantastic methodologists!” and thus complement him well: He is a passionate person who tends to go with his gut feeling. Internally, he is seen as a motivator, as he lives his job with enormous devotion.

What would he have become had he not taken this particular career path?

Well, since he was very lucky and had not gone out to sea too early, he is exactly right where he is, says Christoph Ranze. He would have definitely become self-employed in any case. Coming from a family of farmers, hauliers, and innkeepers, entrepreneurial plans, investments, and ideas have always been considered extremely important in his family. He has always been  surrounded by doers and creators.

What does the ideal employee look like? And: What type of employer does he want to be?

Ten years ago, he would have answered this question more easily: I am looking for specialists with a drive. But over the past few years, his focus has shifted to management training. The managerial team was tested: Everyone expecting high performance of their employees needs to challenge stereotypes themselves and look out for their own development. One has to look at things differently as a manager. The most important thing now is to support the rethinking of managerial styles – away from hierarchies and towards managing as coaching that places people into the focus and asks: Who are you? Where do you want to go? What are you passionate about?

At encoway, in essence, diversity is most essential – there is higher mobility in the company due to this diversity. He wants to be contagious. There are almost no more classic application procedures. Those interested should take some time and visit the company.

Actually not that far away – namely to his eighteenth birthday. Not to far-away worlds but simply to relive everything the same way with the chance to add or leave out a word here or there. To modify certain decisions – with the knowledge he has today. To take some short-cuts along the way, but also to sometimes take more time.

However, as the father of three children he already lives one dream or another quite intensively now. He loves mountain climbing and races in charity rallyes, which is why he will soon travel to Tajikistan! On far-away plateaus and for a good cause, he will put time, energy, and money into the project. Fun, encounters, and adventures – a mixture that determines Christoph Ranze decisively.

If you want to further look into encoway, you can browse through their website at www.encoway.de or talk to the alumnus directly.

Thank you VERY MUCH for the interview, Christoph Ranze.

Editorial note: The views and opinions expressed in this interview are those of the interviewee. They are solely their own and do not necessarily reflect the opinion of the editors.