Socially-Aware User Interfaces: Can Genuine Sensitivity Be Learnt at all?

Recent years have initiated a paradigm shift from pure task-based human-machine interfaces towards socially-aware interaction. Advances in deep learning have led to anthropomorphic interfaces with robust sensing capabilities that come close to or even exceed human performance. In some cases, these interfaces may convey to humans the illusion of a sentient being that cares for them. At the same time, there is the risk that - at some point - these systems may have to reveal their lack of true comprehension of the situative context and the user’s needs with serious consequences to user trust. The talk will discuss challenges that arise when designing multimodal interfaces that hide the underlying complexity from the user, but still demonstrate a transparent and plausible behavior. It will argue for hybrid AI approaches that look beyond deep learning to encompass a theory of mind to obtain a better understanding of the rationale behind human behaviors.

Elisabeth André is a full professor of Computer Science and Founding Chair of Human-Centered Multimedia at Augsburg University in Germany where she has been since 2001. She has multiple degrees in computer science from Saarland University, including a doctorate. Previously, she was a principal researcher at the German Research Center for Artificial Intelligence (DFKI GmbH) in Saarbrücken.

Elisabeth André has a long track record in multimodal human-machine interaction, embodied conversational agents, social robotics, affective computing and social signal processing. Her work has won many awards including a RoboCup Scientific Award, an Award for Most Innovative Idea at International Conference on Tangible and Embedded Interaction (TEI) or the Most Participative Demo Award at the User Modelling, Adaptation and Personalization Conference (UMAP).

In 2010, Elisabeth André was elected a member of the prestigious Academy of Europe, and the German Academy of Sciences Leopoldina. To honor her achievements in bringing Artificial Intelligence techniques to Human-Computer Interaction, she was awarded a EurAI fellowship (European Coordinating Committee for Artificial Intelligence) in 2013. In 2017, she was elected to the CHI Academy, an honorary group of leaders in the field of Human-Computer Interaction.

Since 2019, she is serving as the Editor-in-Chief of IEEE Transactions on Affective Computing. Most recently, she was named one of the 10 most influential figures in the history of AI in Germany by National Society for Informatics (GI)." 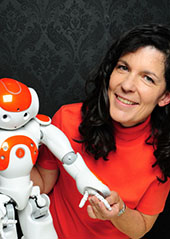