Established 1971 – The University of Bremen’s History 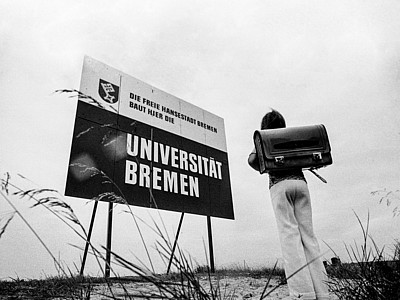 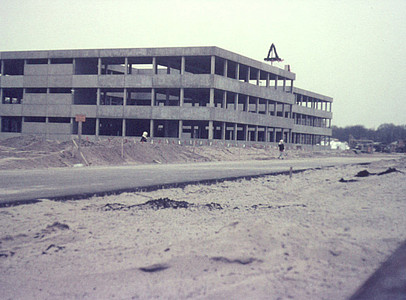 © Landesbildstelle Bremen
The structure shell of GW1 in 1970. 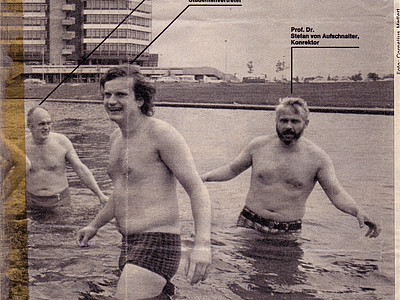 © Cornelius Meffert
In 1975, senior officials went for a swim on campus in response to media reports that the university might go "belly-up". 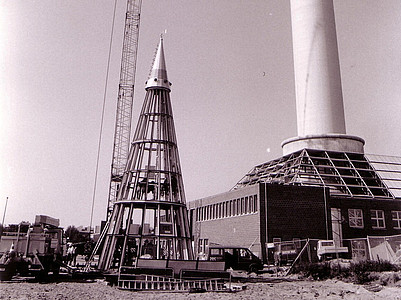 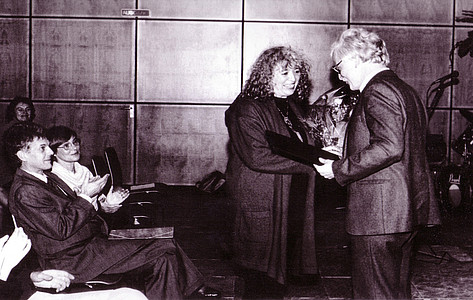 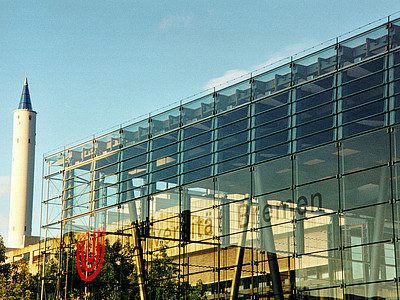 © Harald Rehling, Universität Bremen
The university's entrance hall has been welcoming visitors since 2000. 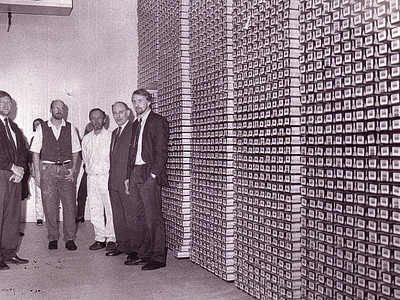 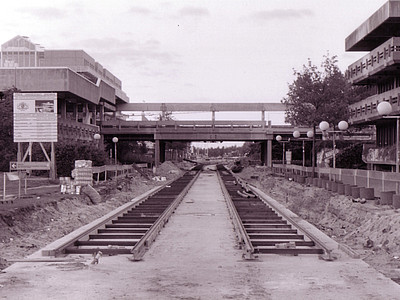 © Universität Bremen
Between 1996 and 1998, tram line 6 was extended to connect the university to the city centre. 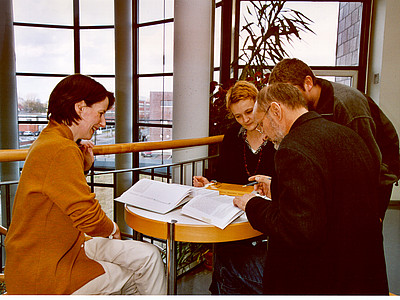 © Universität Bremen
The Graduate School of Social Sciences (GSSS) was first opened in 2002. 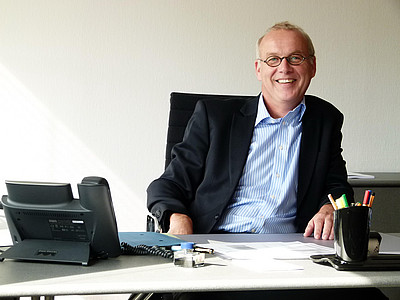 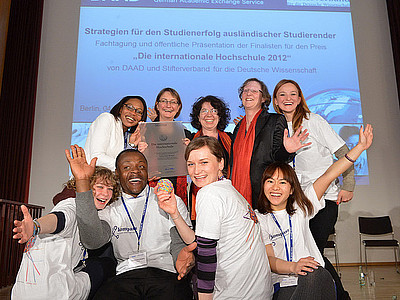 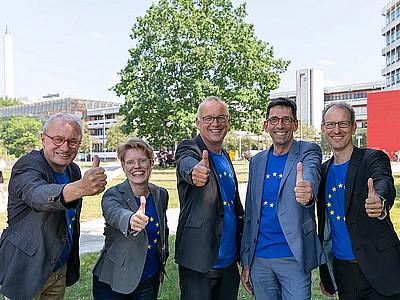 © Matej Meza / Universität Bremen
For a European University: The University Executive Board is pleased with the decision of the EU Commission.

Founding and the “Bremen Model”

The early 1970s were a time of renewal for the young Federal Republic of Germany. Especially the student movement of the 1960s triggered important societal reforms that led to changes in politics and institutions.

It was during this time of change that the University of Bremen was founded. When the first semester started on October 19, 1971, the reform university had only 459 students and most of them were training to become teachers. However, the university was on everyone’s lips across the country. This was down to the fact that the “Bremen Model” was practiced on campus – a system that broke with some ideas of the traditional university. Many of the academic establishment regarded it as too radical. Which is exactly why many young people found it so attractive.

The “Bremen Model” anticipated many developments that were in store for all German higher education institutions. Its key elements remain untouched at the university today: interdisciplinary work, research-based projects, practical orientation, and responsibility towards society. New goals have been added over time: internationalization of teaching and research, gender equality, and environmentally friendly actions.

After various reforms during the beginning stages, an important phase of consolidation and growth followed in the 1980s. In 1982, a cooperation contract was signed with the newly established Alfred Wegener Institute for Polar and Marine Research (AWI) in Bremerhaven. By doing this, the university laid the foundations for its broad expertise in marine and climate research, which has been expanded over the years thanks to many additional cooperations and foundings.

The university also positioned itself more broadly in research and teaching with new faculties – for example, Production Engineering (1983) and Geosciences (1986). The University of Bremen was accepted into the German Research Foundation (DFG) in 1986, and in 1988 with the establishment of one of many Collaborative Research Centers that were to come, it showed its continuing and outstanding strength in acquiring third-party funding.

From 1988 onwards, the Center of Applied Space Technology and Microgravity’s (ZARM) Drop Tower, which received its 146 meter “crown” in 1990, was constructed on the Technology Park Bremen campus. In its form as a “sharpened pencil” and symbol of the university, it is no longer possible to imagine a Bremen landscape without it. More than 500 high-tech companies and more than 50 research institutes are part of the Technology Park.

The university has always gone down innovative paths in matters of structural modernization and been connected to the pioneering spirit of the early days in this way. In 2001, the university was the first in Germany to introduce the tenure track system for the support of assistant professors: This was the so-called “Bremen perspective.” The switching of the degrees into bachelor’s and master’s courses was also completed particularly quickly in Bremen.

Intense support of early-career academics, internationalization, and the shaping of the research profile elevated the regional and international visibility of the university and were finally rewarded with great recognition. Together with numerous partners from the fields of science, politics, economy, and culture, the university won the title of “City of Science 2005” for Bremen State. The university also celebrated great success in the three rounds of the Excellence Initiative and the subsequent German Excellence Strategy – for example for the Cluster of Excellence at MARUM Center for Marine Environmental Sciences at the University of Bremen, which is still in existence today. The university also held the title “University of Excellence” for several years. In 2013, a special award for the extraordinary supervision of international students followed: The Stifterverband and German Academic Exchange Service honored the University of Bremen as “International University 2012.”

The Present and the Future

Around 23,000 people from over 120 nations are learning, teaching, researching, and working at the University of Bremen today. Their joint goal is to contribute to the further development of society. With around 100 degree programs – from the deep sea into space – the choice of subjects at the university is broad. As one of the leading European research universities, the University of Bremen maintains cooperations with universities and research institutes across the world. Regionally, the university is part of the U Bremen Research Alliance.

The challenges of the future will only be able to be overcome if strong universities bundle their strength. The University of Bremen has recognized this and significantly expanded its international network accordingly. Since 2018, the university has been part of the YUFE (Young Universities for the Future of Europe) alliance. In the alliance, ten universities and four non-academic partners will create one of the first European Universities in the coming years. In the fight against climate change, the university is the only one in Germany to have been involved in the establishment of the worldwide International Universities Climate Alliance (IUCA) – a unique network made up of 35 universities that are global leaders in the field of environment and climate research.

The University of Bremen will continue on its path. As a “learning organization,” it will carry on striving to repeatedly redefine the role it wishes to have in the present and future scientific landscape.

More on the History of the University of Bremen

In October 2011, to mark the occasion of the 40th anniversary the Temmen-Verlag published the book “Universität Bremen – 40 Jahre Bewegung” (University of Bremen – 40 Years of Ongoing Change). The journalist and alumni of the University of Bremen, Peter Meier-Hüsing looks back over the past four decades: not sparing with his criticism, he also writes with empathy and humor.

Another book on the University of Bremen was published by the Donat-Verlag. In the volume “Tradition Reform” [Reform as Tradition], Dr. Birte Gräfing describes the highly debated initiation.

“From Marx to Darwin – University of Bremen – a Timetravel”: this is the name of the documentary film on the University’s history which the alumnus Michael Wolff produced with his Bremer Medienproduktions GmbH “fact+film”. The world premier of this fascinating film was in November 2011 at the Bremer Schauburg. The video is available via the Press Office.