On an espresse with .. Wolf Gunter Brügmann-Friedeborn

Former Director of the Newsroom at Frankfurter Rundschau 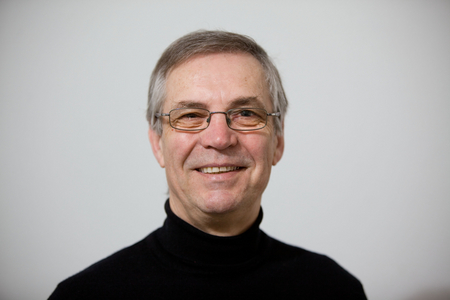 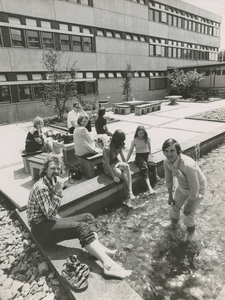 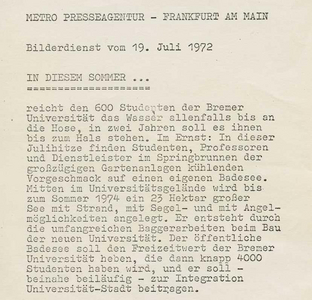 When did you work at the University of Bremen and what was the reason for deciding to go to Bremen, Mr. Brügmann-Friedeborn?

In 1970, I was hired as the press officer as the third full-time employee after the founding rector Thomas von der Vring and the founding chancellor Hans Heinrich Maaß. Before that, in Frankfurt, I had been a student of Theodor W. Adorno, Jürgen Habermas, Iring Fetscher, Ludwig von Friedeburg, and Carlo Schmid. However, I then quit my studies in order to start a traineeship at the Frankfurter Rundschau. When the University of Bremen opened in the fall of 1971, I only audited classes. In 1972, I quit my permanent contract in the civil service, which was met with general incomprehension by many, and dedicated myself again to my studies in sociology and adult education, especially worker’s education, until 1976.

What is your most important memory of the University of Bremen?

My most sustainable memory is having been involved in developing and establishing a new university ‘in the field’ so to say as a young person of only 24. You only get such a chance once in your life. (laughs) Well, now and again it was quite a tumultuous learning process for everyone involved: for the senate and the parliament and for researchers and administrative staff as well as of course for the first generation of students. This phase shaped me a lot.

Who or what influenced your career the most?

Next to Thomas von der Vring, in Bremen it was Hans-Dieter Müller, who started as the personal assistant to the founding rector and then gained significant influenced far beyond the university. In terms of teachers: Siegfried Braun, Alfred Lorenzer, Rudolf Billerbeck, and Wolfgang Däubler, but also Rudolf Hickel, Rainer Zoll, and Adolf Brock. Maybe somebody else remembers them as well as I do? In addition to that, I was active in the cooperation between the university and the Chamber of Employees; a truly great time, in which we made history.

What advice would you like to give the students of the University of Bremen?

Develop and keep obstinacy. Learn to think dialectical in context and contradictions. Don’t limit yourself to the acquisition of technical knowledge. Understanding is much more important than merely knowing. Be tempted by your initiative. Interdisciplinary project-based learning and explorative learning were our new opportunities then. Think about scientific responsibility for the greater good of our society. This is my advice. This may sound excessive – but it is the basics in designing our future, personally and socially.

… a success story in two respects. First, as the reform university with the most significant changes – and the stigma as a ‘commie training center’: tripartite codetermination between teaching staff, administrators, and students. There really were many new things to experience – for example the equal treatment of all teaching staff, be it a full professor or an assistant professor! An integrated basic study course in social sciences for students of economics, business administration, and sociology. A unique approach at that time. Even a single-phase judicial training. Teacher training and social education had a particularly bad reputation among conservatives. Much of it did not last long – but it still left its marks!

And that is exactly what was important to us, to try something, change something, to not simply accept but completely rethink everything.

In its further development, the university has gained wide, also international recognition in not only but especially the natural sciences and technology. This is also reflected in the multitude of grants awarded by the German Research Foundation (DFG). In my time, the DFG thought the University of Bremen to be completely unworthy of funding. I had not expected this process, which I would like to call a second founding phase. This is astonishing and remarkable.

… the clear acknowledgement of the roots for my professional, social, and political socialization in Bremen. I am very happy that an alumni group has now also formed in Frankfurt. And that an old geezer of 72 like me is accepted by the young folk in such an uncomplicated manner! There seems to be a Bremen University spirit after all that connects the generations – despite their utterly different experiences. And that’s exactly the point: to build a network.

After graduating, I became chief political editor at the Frankfurter Rundschau, where I was head of the newsroom and where I remained until my retirement in 2006. On the side, I was a lecturer for union education and professional development. I have been a part of the leadership of Frankfurt’s Protestant Church for some twenty years now. Additionally, as a curate, a lay preacher, I conduct the worship independently. So, I remain a designer – with passion.

What are your goals, what are you looking to achieve?

Growing old confidently and with dignity.

Where would a time machine bring you?

Rather into the past than into the future. Reliving the 60s and 70s again with today’s life experience – that would be great!

What would you have become had you not gone your path?

I had wanted to become a journalist since my time at school. Becoming a pastor or a teacher would maybe have been another option.

What types of employees are ideal for you? Or what type of employer do you want to be?

Those with two capabilities at the same time; having the down-to-earth reliability and strength of a cold-blooded draft horse as well as the nervous sensitivity of a hot-blooded Arabian; those who combine the necessary drudgery with the recognition of signals for innovation and for warding off danger; those, who do not hide in a team but are willing to decide and act with accountability.

How do you deal with different cultures and with communication in the company?

I have learned how good it can be to have a strong feminization at work. My, albeit not representative, experience from the newsroom: Men like to carry their ego conceitedly like a shield in front of themselves when they talk; women rather tend to argue the case and for the task in question without making it about themselves.

A ‚brain software‘ that can transform thoughts into written words and can document dreams.

Who are your role models?

The odd farmer, fishermen, sea pilot from my home village Laboe near Kiel. Also, Hannah Arendt and Dietrich Bonhoeffer, to just name two of many.

This espresso went into extra time – as a Latte Macchiato perhaps. However, such an interesting shaper of the first hour is allowed a few more words in this section. THANK YOU very much for the interview and good luck with the University of Bremen’s alumni in Frankfurt!